“EU” was the title of a retrospective exhibition gathering the work of Kobe-born Satoshi Fujiwara at the Osservatorio Prada, an offsite location of Fondazione Prada in Milan dedicated to contemporary photography. Fujiwara moved to Berlin in 2012 at the age of 28, attracted by the multiculturalism of the city. He was also fascinated by the complex relationship between the media’s production of visual information and the people who consumed it, especially given Germany’s greater tolerance toward violent imagery compared to his native Japan. Underlying Fujiwara’s practice, as curator Luigi Alberto Cippini explains in the exhibition’s catalog, is the thought that image professionals documenting reality in Europe are subject to standard technical constraints to make their products commercially competitive, producing equally standardized ways of viewing the resultant images.

In order to engage critically with the forms of ideological bias and hidden propaganda, which the artist believes is ingrained in present-day photo-reportage in Europe, Fujiwara uses a signature style which blends different formats, advanced digital manipulation and extreme close-ups. Entering the exhibition, the visitor had the impression of being in a post-industrial environment. The pictures were printed on PVC sheets of various sizes, and attached to the walls with metal bars and packaging tape. Images were gathered in assemblages, overlapping and dangling in a casual manner; some PVC sheets were taller than the vertical wall surfaces, so they reached the floor and continued to carry the photographs horizontally, or the bottom of the sheets were crumpled near visitors’ feet. The pictures’ captions were attached to the PVC sheets with Velcro strips, and were accompanied by small images documenting post-production phases of the projects. The exhibition spread over two floors. The lower floor hosted pictures from the “5K Confinement” series (2016), which was first conceived for the artist’s “Belligerent Eyes” project that dealt with contemporary image production and was exhibited last year at Fondazione Prada’s Venice outpost Cà Corner della Regina. In this series, high-resolution close-ups of limbs, heads and faces were superimposed on a background of blown-up details of fabrics and, perhaps, filming equipment components. Drab and difficult to read, these pictures, as clarified in the catalog, were shot in an experimental cinema school, where a group of young people under the surveillance of closed-circuit cameras tested the machinery’s ability to oversee extended areas through a great number of movements. The sense of malaise and claustrophobia that the series elicited was less an effect of what was shown than of Fujiwara’s puzzle of fragmented, blown-up details that conjured up the invasive, skewed voyeurism of surveillance apparatus.

Much the same mood pervaded the second floor of the Osservatorio, which brought together works from different series dating from 2015 to the present, mixed together in large assemblages. For instance, merged pictures from three series, “Police Brutality” (2015), “#R” (2015– ) and “The Friday: A Report on a Report” (2015), resulted in a loaded collage of details of police uniforms, horses’ fur, badges and helmets surrounding a large picture of a cameramen in the process of filming. By associating title and images, one was inevitably reminded of violent clashes involving police forces. The pictures, in fact, were taken at different times and in different countries during standard police operations, when there were no clashes or riots. What Fujiwara seems to suggest is that digital manipulation—which he believes is used in photo reportage as an instrument of propaganda—can be instead turned into an instrument of critique: “Given how digital editing technology allows for the possibility to obscure the truth, is there a potential to do the reverse and use fake images to tell hidden truths?” 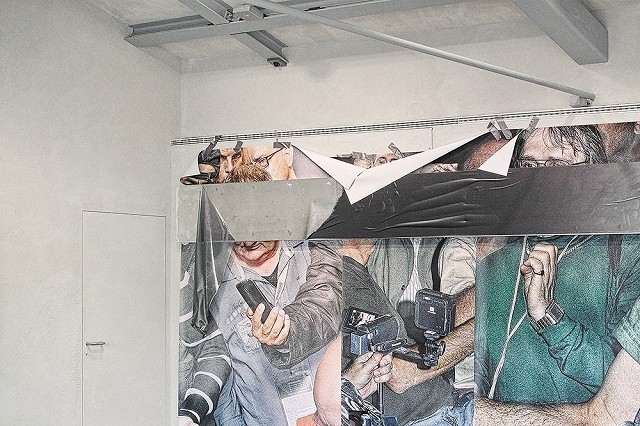 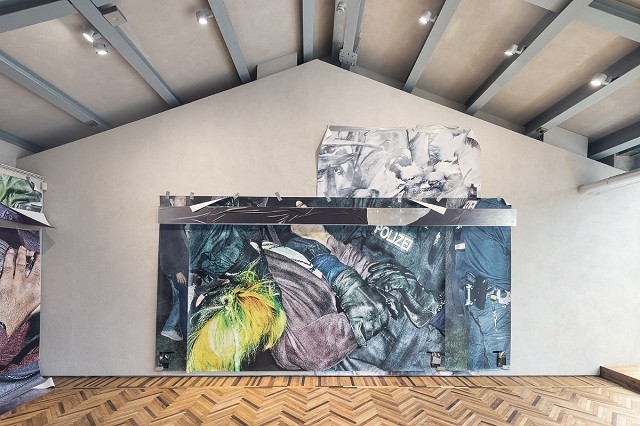