On November 13th, 2015, I was in Paris attending exhibitions and other photography-related events. Having spent the evening dining at a restaurant with a few colleagues, it was only when I returned to my hotel that I noticed the unusually large amount of e-mails from family and friends in Japan and Berlin (where I am based). People I had long lost contact with that knew I was in Paris, thanks to social networking, sent me messages asking about my safety. That was when I first became aware of the incident; the multiple, simultaneous terrorist attacks in Paris. Realizing that people so far away were better informed than I, despite my being in the general area, I began to gather information on what was happening in my vicinity using the internet and the TV in my hotel lobby. Headlining the news everywhere, people all over the world were being fed a steady stream of sensational images and videos. Through the constant updates of the number of casualties, information on the suspects, and visuals of the attacks, I learned that one of the shootings had happened only a few train stops from the hotel I was in, and another near a restaurant that I had eaten at a few days prior.

Acclaimed photographer Gary Winogrand, who coincidentally passed away the same year I was born, 1984, would take photos of people and reporters that would attend public events from a somewhat withdrawn point. By collecting these images into the series Public Relations, he documented the relationship between the media and the people as well as the social situation at that time. I sought to show just how much the relationship between the ones that spread information and the recipients of said information has evolved and grown since then. By using the subject and the light that is reflected from the background I looked to extract and highlight the three colors in my photos as a reference to the social media movement that followed, where the world used the tricolor to unite and show support to the victims of the attack; a reflection of today’s complex relationship between the people and the media.

A few days later, at the studio in Berlin, checking the details of my pictures, I noticed something; a lot of the equipment being used by the reporters, such as cameras or lenses had been made in Japan. Intruding into their documentation, whilst being shouted at by cameramen for getting in the way of the shot, I took pictures using my camera from Japan. The details of the images I took, e.g. warning labels and the logos of Japanese camera makers in old Japanese typeface, that were attached to a foreign source, spoke to me more than my “experiences”. On the way back from the studio, walls lit up blue from police cars streaking through Berlin, and the red from brake lights bled onto the asphalt as if to remind me, sitting at the window of a late-night bus, of the images of the attacks. 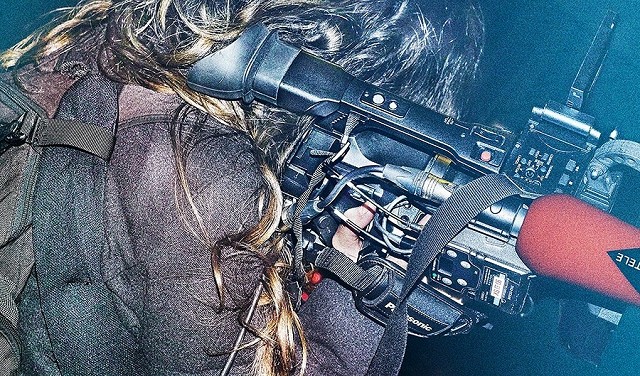 From the series Friday Reports, 2015, Image courtesy of the artist