(...) On one level, Satoshi Fujiwara is a street photographer; he carries a camera with him in his day-to-day life and shoots people and events that catch his eye. His particular approach, however, makes these far from ordinary documents. Zooming in on details, Fujiwara abstracts his subject matter a good deal. In Code Unknown, extreme close-ups of faces on the Berlin subway become high definition studies of wrinkles and folds (Fig.) (2014-16). This imagery cannot be separated from the way it is displayed. Some of the close-cropped images are displayed as regular prints, characterized by their extreme detail. Fujiwara also digitally joins individual images into strips and prints them on rolls of vinyl that he then drapes, crumples or folds to suit their particular site. The resulting installations are sculptural, even architectural in the way that they claim a space. Like so many of the photographers in this book, Fujiwara’s work gains impact from the fact that it crosses boundaries of nations as well as genres.

The artist describes being inspired by the unfamiliar, chaotic qualities of European visual culture in relation to the homogeneity of his native Japan. He has brought aspects of this fascination with the West back to Japan; the fleshy pink faces of Code Unknown were featured on t-shirts and bags for Issey Miyake’s 2015 Men’s collection. German audiences, too, are intrigued by the vision of themselves presented in Fujiwara’s work. Elements of Code Unknown were exhibited at the German Opera, Berlin in 2016, alongside work with more explicit political bite, 38 Elements of a Chronology of Chance (2016). In this project, the artist combines image fragments made in Southern Europe, North Africa, and Germany to create an edgy, fictional montage with echoes of the refugee crisis. Among the folds of vinyl, viewers glimpse seemingly significant details: the spur of a mounted policeman, the logo on a pair of handcuffs, the wound on a man’s arm. In relation to this loaded subject matter, the crumpled vinyl on which it is printed evokes discarded newspapers. Through an accumulation of surface information, 38 Elements offers flickers of experiential insight that news photographs cannot provide. 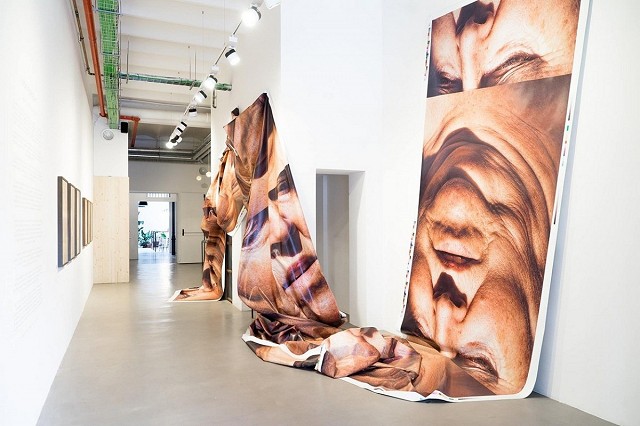